I`ve seen them party hard all over the boat. It’s Rockstars On Mars with London LeGrand on his naughtiest behavior. I meet up with them, only to find the boys posing next to a passed out guy. This night, on this boat, there`s nothing called too much alcohol. Throw in three Gothenburg rockers and one LA-legend in the mix and there you have it: It’s Rockstars On Mars.

MALENE: So what is the genre of your music?

London: Sleaze-glam straight up! Dirty, fucking, sexy, rock n' roll. Pull your panties down and throw your bra! It’s getting-laid rock. It’s how it should be. None of this political bullshit!

​MALENE: So how did you guys come up with the idea for this sleaze-glam band?

London: A long time ago I played with Brides of Destruction with Nikki Sixx (from Mötley Crüe) and Tracii Guns (from L.A. Guns) and Scot Coogan(past member of the Ace Frehley Band).  At that time he was jamming with Sinéad O'Connor, the chic that tore up the picture of the pope. So anyways, I went on tour with these cats and afterwards, once everybody were back to their bands and stuff like that. I got this idea to start this Sleaze-glam band. I came out to Sweden and I looked at the audience and at that time everyone was fucking rock n' roll, which they still are to this day!

I came back to LA and I was like: This is it! We need to start this shit now. So I started a rock n' roll band with the influences that I grew up with, which were the sleaze-glam elements, and put it together and got these cats from Sweden. Now I`ve got four sleazy motherfuckers!
Dave: I play bass in the band.
London: Dave is the sex slave
Dave: Eh, yeah. Dave the sex slave!
London: He hasn't yet learnt how to be a sex slave. He's still a master.
Dave: I'm a masturbator.

London: So anyways, any woman who is thinking that they can like push him around. You can! But he still will dominate your "cooch". 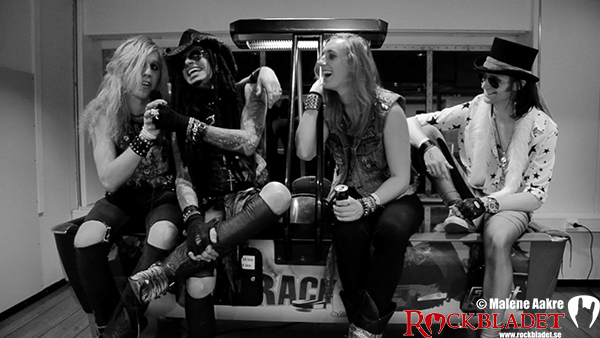 Dave: How does it feel to play in the band Rockstars on Mars?

London: It feels fucking how it’s supposed to be!

MALENE: Haha, you guys are hilarious! Could you tell me, what are your expectations for this gig?

London: Lots of sex, lots of fucking partying and lots of rock n' roll. We hope people dig our shit and if they don’t well…

Dave: Too bad for them! This is our first gig together as a band and yeah, we just want to have a good time you know.

MALENE: Who writes the music and what have you written so far?

Dave: That’s all of us together. We have like ten finished songs and millions of ideas. Caesar produces our music. Caesar, can you tell us something about your work?

Caesar: The songs we have released now are mostly just to get our music out there. I am soon going to sit down and remix our songs. I am planning on breaking down ”Appetite of destruction” (Guns N' Roses) into small components, look for vital elements, signums and so on. Then I am planning on using that sound and that album as a role model while mixing. Everybody in the band loves the feeling of that album.

I also do a lot of spontaneous “effects”. Everybody in the band have an ear for details and that often contributes to a good result. We love our music and want to play the kind of music we ourselves would like to hear, because of that we think, it’s important that we all love the sound of the music, even though we have to compromise sometimes.

MALENE: What’s the purpose and the goal with your music?

Johnny: We all love rock n' roll and music man, so we just want to like hang out, have a good time and do what we love the most and that is writing and playing music.

London: In all seriousness. We got together as friends. They were looking for a singer and I was looking for a sleaze-glam band. We went through rehearsal just having fun. We are just big fucking kids, how it should be, you know what I`m saying?

Johnny: We`re gonna do our thing whether people like it or not.

MALENE: Finally, would you like to say anything to any of the bands on the boat?

Johnny: Do your thing. Do what you love the most, just like us. Never care about what other people think.

London: And we want to party with you fuckers tonight! 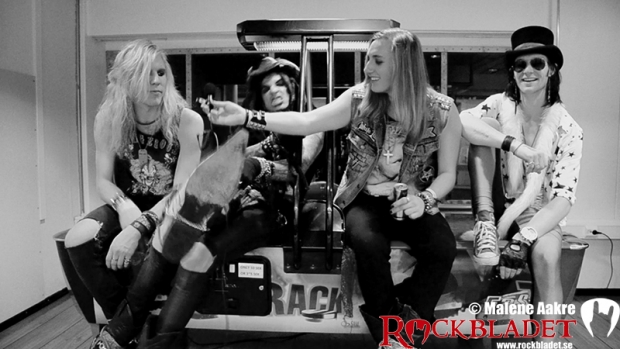