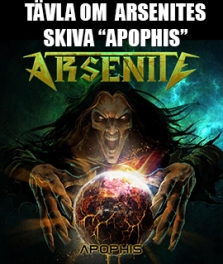 Arsenite was formed in 2009 by guitarist/singer Tony Classon and guitarist Simon Hagberg. Even though they did not have a drummer or bass player yet, they decided to record a demo containing their first original song, Liberty is Dead, and two covers of Megadeth and Wolf. The demo was recorded with programmed drums, and Simon recorded the bass.

At the end of 2009, the band found drummer Richard Fredriksson, and in early 2010, they entered the studio to record another demo, containing three original songs.
The band played a few gigs, before finding bass player Martin Giaever.
Now, with the line-up complete, and more songs written, the band recorded the EP High-speed thrashing maniacs. The vocals of the EP was produced by Wolf singer and frontman Niklas Stålvind, and was recorded in his homestudio. The EP was released in 2011 and got in the eyes and ears of Sliptrick records, and landed the band their first contract.

The record label gave the EP an official digital release in 2012, while the band was booking a studio to start recording their first full-length album.
Due to creative and personal reasons, drummer Richard Fredriksson had to be let go.
The band was lucky enough to quickly find a new drummer, Henrik Persson.

After intense rehearsing with the new drummer Henrik, the band entered the studio in spring of 2012, to finally record the debut-album Ashes of the declined.
The album was digitally released in November of that year. The physical release was pushed back because of some complications, but was finally released in early 2013.

The band went out for a couple of gigs with the release of Ashes of the declined and received a lot of new fans and great attention.

In April 2014 Simon hagberg decided to leave the band due to personal things and Arsenite recruited guitarist Niklas Gustavsson from the band Convict and he is now a full member of Arsenite. 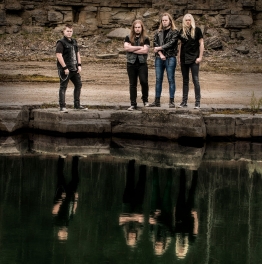